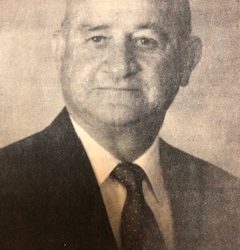 As a gift to Dr. Currie on his 90th birthday in 2018, the Pemiscot County Historical Society is honored to present the life story he gave when he was honored with the Pioneer Heritage Award in 2007.

Recipient of the Pioneer Heritage Award for his Life Story Presented at the Pemiscot County Historical Society Meeting, September 28, 2007

I was born on Division Street in Jackson, Tennessee on Christmas Day in 1928. Mother said that the doctor had to step over my older brothers’ toys to get to her. The bed in which I was born is now in our guest bedroom. My parents were Winburn Goodpasture Currie and Anne Cheek Barton Currie. My father was a traveling salesman for a paper company. I was the youngest of four sons. My brothers were Barton, “Dub”, and Bill. Barton and Bill died some years ago, and “Dub” and his wife, Lois, live in Humboldt, Tennessee.

We moved from Division to 10 Northwood in 1930, and I lived there until I left Jackson for good after I finished seminary in 1956. Northwood was a dead-end street and we had fun playing with friends and often playing hockey and other games in the street. There were many young people on the street including my two best friends, Thornley Jobe and Tompy Dabney.

The four Currie boys plus some neighborhood friends got into a lot of mischief, and thus we were known as the “bad Currie boys”. I have always said that I was the good Currie boy – relatively speaking. We did the usual things, such as throwing snowballs and mud balls at passing cars. Our unusual escapade was the time that we kidnapped a friend, tied him up in our garage, and held him for 35 cents ransom. (When his father finally found him he didn’t think it was funny.)

German prisoners of war were held at a camp near the airport and were transported across town each day to work on farms. Some of us found their route, hid in the bushes, and threw mud balls at the Germans for three straight days. On the third day, the GIs driving the trucks slammed on the brakes, and the Germans jumped out and started chasing us. I ran half a mile to a friend’s house, knocked on the door, and frantically said – “Let me in! The Germans are after us!”

I started the first grade at Alexander School when I was five years old. (I think Mother was anxious to get her last child out of the house.) Mother went with me to start my first day of school. I told her not to come back anymore because we thought it was sissy for your parents to come to school about anything. I attended Jackson Junior High and then Jackson High School. We walked to school – a few blocks to grammar school and high school and about a mile to junior high. (I didn’t walk five miles uphill through the snow like my Dad said that he did.)

I was twelve when the Japanese bombed Pearl Harbor. On the afternoon of December 7, 1941, I heard about Pearl Harbor at the neighborhood drug store and ran home to tell the family. My three older brothers served in the armed forces. I was sixteen and a senior in high school when the war ended.

I had a happy life in school in Jackson. I finally played on the football team in my senior year when I got up to 120 pounds. I wasn’t very good, but I enjoyed it. I also began to play a lot of tennis in high school.

I graduated from Jackson High School in 1946 and began college at Southwestern (Rhodes College) that fall. My four years at Southwestern were very happy years of learning, growing, and making many new friends. I majored in Economics. I played on the tennis team for four years and was captain one year. I was a member of Kappa Sigma fraternity and was President my senior year. I served as Vice-President of our Junior Class and President of our Senior Class. I was so a member of ODK, an honorary leadership fraternity. In my senior year, I was elected to the college Hall of Fame. In June of 1950, I graduated with Distinction in Economics (Cum Laude) and received the Seidman Award for the highest grade in economics over the four years.

During my college years, I spent two summers in the Marine Corps Platoon Leaders program in Quantico, VA. On completion of this training, I was to receive a commission as a Second Lieutenant at Graduation. In a final physical, the last person I saw was the dentist. He said, “I’m sorry, but you do not have enough teeth to get a commission in the Marines.” My Dad said – “What are you supposed to do? Shoot the enemy of bite them?!” The Korean War broke out later that month, and most of the men who got their commissions when I should have gotten mine were given a month’s training and sent to Korea. Many of them were wounded or killed when the First Marine Division was trapped at the Yalu River. After graduating from college, I worked in Clarksdale, Mississippi for a few months and then returned to Jackson to prepare to enter the Army.

I went into the Army in January, 1951, took basic training and leadership school at Camp Breckenridge, Kentucky, and then was sent to Korea as a rifleman in the infantry. I served in I Co., 32nd Reg., 7th Division from August 1951 until March, 1952. While on Rest and Recuperation in Japan, I got sick with an ear infection and was hospitalized in Yokohama for two weeks. After being discharged from the hospital, I had enough points to be sent home to the US rather than back to Korea. During this period, my army records were lost. After a thirty-day leave, I was reassigned to Camp Breckinridge, where IO taught in the Leadership School until my discharge in October, 1952. Since my permanent records were lost, I did not receive the medals that I was due at that time. (Over fifty years later, the wonderful men in our American Legion Post surprised me by securing the medals and having Congresswoman JoAnn Emerson present them to me.)

In my time in Korea, I had felt that God was calling me into the ministry; so if January, 1953, I entered Louisville Presbyterian Seminary. During my three years in seminary, I served as student minister at two churches in Middle Tennessee, two churches in Middle Kentucky, and a church in Memphis, and I also did some supply preaching at other churches.

While serving the church in Memphis, some college friends, Bill and Fran Coley, got me a blind date with Dot McIntosh. Dot was a teacher, and I thought that she would be a “square” – that is dull, but nice. Since I was a minister, she thought the same about me. However, we hit it off from the start. We dated all of that summer and corresponded when I returned to seminary. Dot and I got engaged at Christmas in 1955 and married on June 16, 1956. This was the best thing that ever happened to me.

From the start, we loved our congregation deeply and felt loved and supported by them. Our lives were enriched by the wonderful people of our church and community. Dot taught the third grade at South Side for four years and endeared herself to many students.

In addition to my duties at the Presbyterian Church, I was active in the Ministerial Association and served as president seven times. During this time, we enlarged and strengthened our Ministerial Association through bringing the Black churches and the Catholic Church into the Association. In our ecumenical spirit and activities such as our Christmas basket program, our year-round material aid program and our community worship services, we were ahead of most communities ecumenically.

My community activities included helping to secure tennis courts, teaching tennis to our youth, and organizing tennis tournaments; serving on the Park and Recreation Board when we built the Recreation Center, serving on the Reynolds Park Board, and being a member and later president of the Kiwanis Club. Our church helped to start the Layman’s Prayer Group and I helped to start the first Alcoholics Anonymous group in Pemiscot County in 1960. AA met at our church for the first six months, and I attended the meetings faithfully. When I missed one meeting because of being hospitalized in Memphis, a member of AA said that I had “fallen off the wagon”.

In addition to my service in the local church, I served as moderator of Potosi Presbytery, Memphis Presbytery, and the Synod of Missouri.

Having served in Caruthersville for so long, many people from our church, the community and the surrounding area came to me for counseling. To have people tell me that this helped them meant much to me. Also, I have had the privilege and joy of officiating at so many weddings, not only her in Caruthersville, but also throughout Missouri and in Tennessee, Kentucky, Mississippi, Arkansas, Alabama, Louisiana, Florida, New Jersey, Washington, D.C., and Los Angeles, California. I have a wedding in Florida in December, one here in June of 2008, and in Alaska later that month.

Through the generous support of our congregation, I was able to participate in a three and one-half year Doctor of Ministry Program through McCormick Seminary in Chicago and received my Doctor of Ministry degree on June 10, 1980.

On September 22, 1983, I had the high honor of opening the United States Senate with prayer and serving as the Chaplain of the Senate for that day.

I was awarded the honorary Doctor of Divinity degree by Rhodes College in Memphis on May 10, 1992. This was the day after our son Keith and his wife, Debbie were married in Springfield, MO. Our son David drove us all night to get us from Springfield to Memphis.

Through the years, our loving congregation has been so very generous toward us, giving us gifts too numerous to mention, including the house that was the church manse. The City of Caruthersville honored us with a “Dr. Paul Currie Day” and naming part of 7th Street “Dr. Paul Currie Avenue”. A friend told me -“Paul, don’t be cocky about this. There is nothing on that street except the church and the jail!”

Dot and I are richly blessed to have two fine sons, two great daughters-in-law, and three wonderful grandchildren. David and his family live in Columbia, Tennessee. David is a captain on the Franklin, Tennessee Fire Department, his wife, Dee, is a registered nurse at the Maury County Hospital and their son Jeff is on the Spring Hill Fire Department and continues his college studies. Keith is an Associate Circuit Judge, his wife Debbie teaches in our high school, their older daughter, Anne Marie, is in the 6th grade and their younger daughter, Ellen, is in the 3rd grade. There has been no greater joy in our lives than our three wonderful grandchildren.

I retired on April 6, 1997, after thirty-nine years as pastor of the First Presbyterian Church of Caruthersville. Now in retirement, I learn all of the local news through a “coffee club”, do some supply preaching out of town, play a lot of golf, spend time with family and friends, travel some and serve on the boards of the Housing Authority and the Sheltered Workshop.

As I told the congregation at my retirement, “I have been so richly blessed to have spent my life serving the Lord I love with the wife and family I love.”