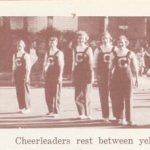 #tbt Caruthersville cheerleaders in the 1950s take a break between leading cheers. Anyone recognize these pretty girls? 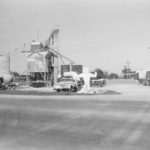 #tbt Does anyone remember the “River Ready Mix” man at the location of the former May Concrete yard on Turman? This is where the Carutherssville School District’s bus barn is now located. 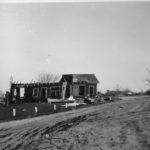 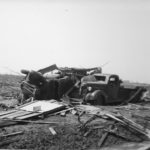 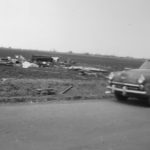 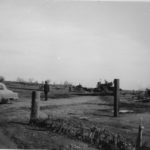 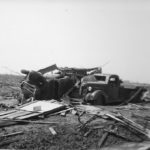 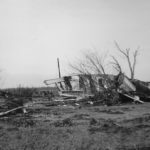 #tbt On March 21, 1952, a tornado moved from Cooter to Cottonwood Point, killing 17 people and causing $14,250 in damage (because it mainly traveled over fields and farm areas). These photographs were in a photo book given to the Historical Society and taken by The Ward Studio at 510 Ward Avenue and an inscription inside the album reads Rebul Brunton, 221 Ward Avenue. 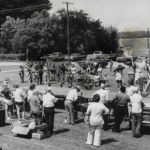 #tbt This photo was taken at an event on the riverfront at Reynolds Park, probably in the late 1960s or early 1970s. Note that Bunge had not yet been constructed. Possibly an auction? Does anyone have any memory of this event? 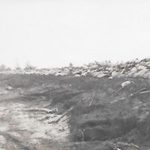 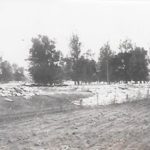 #tbt These pictures show the levee in Caruthersville during high water in 1913. It is obvious how much lower the levee was at this time and with the upcoming construction of the levee here, it will be even a foot higher than it is now. 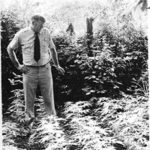 #tbt In the 1980, Sheriff Thad Shelly and his department made quite a find of marijuana. He shows off the hidden field in this newspaper photo from the time. 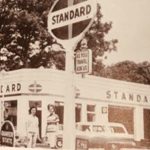 #tbt The Standard Oil station was located at the corner of 11th and Ward, and the building still stands today (with cemetery monuments for sale in front). Albert Carson was the operator of the station for a number of years. This picture is from a Caruthersville High School yearbook in the early 1960s. 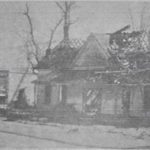 #tbt The quality of this photo is not good, but it does depict one of Caruthersville’s oldest landmarks being torn down in the late 1960s. Located on the northwest corner of Ward Avenue and East Seventh Street, and constructed around the turn of the century by the late J.C. and Maria E. Parks, this structure was originally built for a grocery and feed store and later made over into a residence. At the extreme left in the picture can be seen a corner of the large home Mr. and Mrs. Parks built later on Walker Avenue, where Mrs. Parks lived until her death and which later was the home of the Bill Hayden family. Also on the near left is the “old” fire station, fairly new at this time, which now houses the Medic One ambulance station. 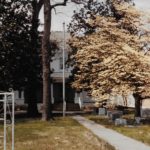 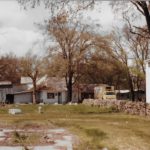 #tbt Pictures of the Dean Funeral Home, which was located where the Pemiscot County Justice Center now sits in the 700 block of Ward Avenue. 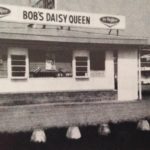 #tbt Bob’s Daisy Queen in Hayti, located at the corner of the formerly very busy Highway 61 and Highway 84. (In later years, it was the home of Boudreax’s Cajun Cooking) As shown behind it on the right is the Dairy Serv, another ice cream place remembered by many around here. 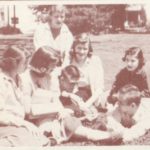 #tbt These students were gathered on the front lawn of CHS in 1953. Recognize any of them? Also, note the building at the left rear – is that the famed “Milk Bar”? 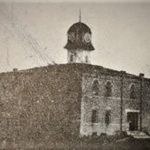 #tbt With a new city hall coming in Hayti, it is a good time to look back at the 1909 City Hall in that city. 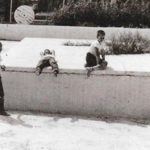 #tbt These young men long for the days when the city pool in Caruthersville was filled with water, as they lounge on the “island” in the middle of the pool area. Not long after this picture was taken, the basin of the pool was filled in and homes were constructed on the site.

#tbt Thomasson’s Shoe Shop was a Ward Avenue landmark for many years at the corner of Fourth Street. 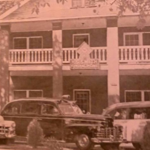 Another photo featuring local funeral homes is of H.S. Smith Funeral Home showing a picture of their first air-conditioned ambulance in 1956, alongside their other two older vehicles. 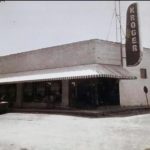 #tbt One of the Kroger stores formerly located in Caruthersville, located at the corner of East 5th and Walker. (The other stores were downtown on Ward Avenue in the early days and near 7th and Ward, where the county justice center is now.) After Kroger moved to the final Ward Avenue location, this store became Ace Hardware and operated until the 90s. The building then stood vacant for many years but was torn down in more recent years. 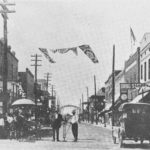 #tbt This picture shows a bustling day in downtown Caruthersville in the early part of the 20th century. This view is going west on Third Street. 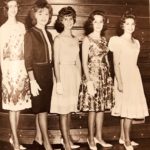 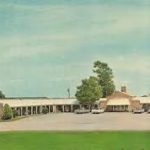 #tbt From an advertisement in the June 9, 1950 Missouri Herald: EL RANCHO HOTEL Hayti Missouri “An excellent place to eat and sleep. Tried and proven . Honeymooning couples are finding the hospitality of the El Rancho most enjoyable.” 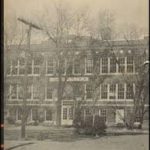 #tbt Steele High School in 1954, before the days of consolidation to create South Pemiscot School District.